How to deal with invalid abuse reports

Having a hard time recently with a particular MSP / Security vendor in south-east Asia who keeps auto-generating abuse reports to our upstreams claiming we “illegally” “probed” them on 123/udp.

We serve the very constrained Asia and African regions and don’t really want to stop serving the pool. Some countries we are all alone with cloudflare. Centralization is a bad thing.

These guys with their automated abuse reports are causing tremendous grief.

Reached out to them once and they whitelisted some of our NTP servers so no reports are sent but they are adamant their system is working as intended and after a while they start submitting again.

We serve from ntpd with

The open localhost is for a monitoring script on localhost to be able to return data. For the WAN facing side it seems sane:

ntpq -c rv will time out.

ntpdate -dqv will return the time. I think that’s about right to serve the pool but not have a huge DDOS amplification factor ?

In any case these guys seem to operate some public WiFi and business networks and when client devices reach out to the pool and we answer the request their IDS seems to not put 2 and 2 together and claims we are hitting them on 123/udp.

Many TB served each month and only this one entity keeps sending abuse reports. This also lead to our entire domain name being sent to some DNS blacklist that people with AdGuard and pihole like to use.

This one of our servers

1a) Explain it’s NTP on port 123 and operating as expected.

1b) Send them back their previous confirmation that they whitelisted some of your servers.

1c) Ask them for the detail of the rule that flagged you up as “attacking” them. Explain that their rule is misconfigured because…

I know these guys. They sent a similar notice to my ISP, from which I have a virtual server in Singapore (and elsewhere). My ISP relayed the complaint to me, and I responded with:

"A kind reminder that UDP/123 is NTP, Network Time Protocol.

If you go to http://94.237.64.20/ you will notice that the sole service provided by this server is NTP. This server (and a few others I have) are in the NTP pool, www.ntppool.org

This and a few thousand other servers provide accurate time for free for millions of Linux/*IX servers, wireless routers, IoT products, many Android phones and other networked appliances.

As for this complaint in particular, it is therefore very likely that some device within the complainer’s organization has requested time using NTP from pool.ntp.org, and my server has responded to that request. This particular server I’m operating responds to around 35000 time requests per second, ie. around 3000 million requests per day. GeoIP is involved, so most of the requests to this server come from Asia/Oceania.

In short, this was no attack but a legitimate response to a request originating from the complainer’s network. If the complainer does not want to receive responses to NTP queries, perhaps the complainer should block outgoing requests to UDP/123 from their network. This is generally speaking not a good idea, though. A better solution would be to adjust their firewall to not warn about incoming UDP/123 packets if they are related to a request coming from their own network."

This was in August. I don’t know if they sent more complaints to my ISP, but at least my ISP hasn’t contacted me again after this.

Life’s too short: block them with iptables!

I was thinking of doing that. Their ASN has a small number of ranges I could just create a centralized list and have the instances pull it an deny access but its against the spirit of the pool.

There is a general uptick in folks taking an interest in (yay!) but then misinterpreting their firewall logs and creating random abuse reports (meh). I had this beauty the other day:

When they were told to RFTM and pound sand and “nothing was done to stop this egregious attack” they followed up:

In this instance the upstream is chill and understands how to filter noise and did not worry about it. But in other markets (Philippines, Singapore) upstream is soul-less automation and will eventually drop us if any stuff comes in. In these markets bandwidth is a seller’s market and you can’t just go stand up a server that serves 10TB of NTP a month pro bono.

For IPv6 we have plenty of in-house space that fixes all of this nonsense but most of the requests are IPv4 and we use other people’s address space so this nonsense goes to support@upstream and it’s frustrating.

in Singapore (and elsewhere)

Thank you for your service.

Come join the Philippines. We need help LOL. Whenever we are down its just Cloudflare doing all of ph.

I know these guys. They sent a similar notice to my ISP, from which I have a virtual server in Singapore (and elsewhere).

BNS hosting.
They seem to be PH/SG based MSP and manage some public WiFI in the region. They have hurt our Singapore, Korea, Japan, Los Angeles, Manila, Cebu and Bangkok NTP pool nodes.

I tried to get them to check what their IDS is doing because I am certain we aren’t dialing out to them on 123/udp from our end. Their devices are making requests and their IDS seems to only see one side of it. They sell their elite IDS capabilities as a service

Their response was arrogant and dismissive. They are adament we are unilaterally connecting to them on 123/udp which is utter nonsense. We connect to in-house Stratum 1 GPS/PPS and some government / university stratum 1 nearby, then serve the pool.

The other day OVH asked me to explain “abusive use originating from my VPS”, without any details provided. It’s just an NTP server, with rate limiting enabled, so not even a 1:1 reflection (unless they are switching between a very large number of addresses).

BNS hosting.
They seem to be PH/SG based MSP and manage some public WiFI in the region.

I’m wondering if it’s related to the broken timesyncd clients flooding public servers for hours or days. Many of them seem to be in PH, more than any other country, at least from what I see on my servers. I tried mailing the corresponding abuse addresses, but never got a response.

Simply send abuse complaints to them for “probing port 123/UDP” on your server. Either they will start blocking traffic to you (so no future abuse reports from both parties) or they start to explain why this is not abuse. And their explaination will become your answer to their future abuse reports.

I’ve gotten two of these false abuse reports from BNS hosting so far. I’ve went ahead and blocked their subnet (202.91.160.0/20) from my NTP servers because I don’t want to risk my hosting provider shutting down my NTP servers because BNS can’t figure out how to properly run their automated firewall log reporting system.

I have been responding to them, and they ignored them, till I added the whois email to it, every time I email with him added (Wilson@dagupan.com) I get a response saying I will be whitelisted, I keep getting the notices every few days.

Last time I told them I had enough of it, and I got another one today, and responded again to them, and I blocked their asn from my routers.

I have also gotten abuse complaints, and even had one of my servers terminated due to it.
Do people who run these firewalls just not know what NTP is?

It’s not a question of who runs them, it’s the people that do the lack of security review of the incident reports.

The systems IDS systems all flag any ntp incoming as an issue, cause it isn’t smart enough to know what ones are attacks and what ones are not. Really this issue was resolved a decade ago but well.

So people that do not do security correctly, and just depend on what the automated system says, without customizing it and filtering out false positives and just turning the detection level way up, you get this issue.

It’s just insane they would send these reports out automatically. I am in no fear of being terminated, as I own my ip space.

giant.rocks - AbuseIPDB User Profile seems to be a totally different issue.
It appears they are a pool server, and they are also running a website on the same ip.
Any hit to their website using the pool ntp org is causing them to be flagged as an attack and when it lookup pool ntp org to report the attack, it’s using whatever the dns servers return for that entry at the time, causing this pool user to be reporting all other pool users.

oh, how nice of him, he even reported himself, giving away his real name, home address, phone number and everything.

I found an email on one of their websites and sent them an email explaining the situation with a link to this thread.

Guess we’ll see if anything comes of it

I tried and had some dialogue. The person there insists that our server is initiating contact to their clients on port 123…

Will be interesting to see what you hear back.

Got a reply back pretty quick actually, he apologized and said he was looking into it. 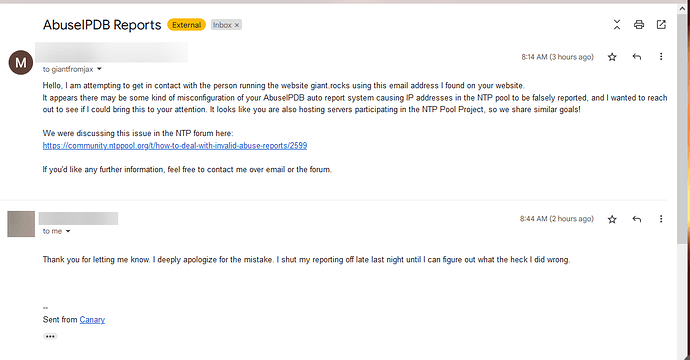 I found an email on one of their websites and sent them an email explaining the situation with a link to this thread.

Guess we’ll see if anything comes of it

Are you sure this is the same entity ? BNS Hosting out of South-East Asia ?

Edit: oops I missed that giant.rocks side-issue. I just noticed they did report our nodes, too. It’s a struggle.

Yep, definitely the same entity. He told me that someone got in contact with him the other day as well to report the problem, and that he actually shut the system down on the 28th to investigate.
Funny how things work out like that, but glad the AbuseIPDB part is being looked into now since this has been happening for like 7 months.